There’s More To These 10 Strange Cat Behaviors Than You May Know!

There’s nothing quite like the comfort and companionship cats provide. They’re notoriously moody, of course, but even the most icy and aloof felines muster up an approving purr from time to time.

Their independent, low-maintenance nature makes cats the perfect pets, and keeping in tune with their needs isn’t particularly hard when they manage to meow for their meals. But there are also times when our feline friends leave us scratching our heads.

Do you know what to do when your cat bares its belly? How about when its tail starts twitching? From the unassuming cat loaf to the midnight crazies, here is a list of some of the most common cat behaviors and what they mean.

A twitchy-tailed feline may be trying to signal disapproval. If you’ve ever wondered how many pets you’re allowed before your cute kitty turns into a nightmare of razor sharp terror, watch its tail.

A calm cat will move its tail slowly from side to side, while an anxious one may jerk it around at a quicker pace. It’s typically not a sign of excitement, but one of annoyance. Watch for those claws to come out soon! 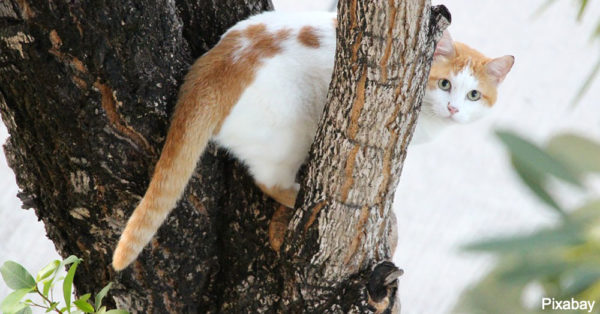 The most satisfying morning stretches are often accompanied by kneading paws. It’s not unusual for cats to knead in other situations either. Young kittens will knead their mothers bellies as they nurse to get the most milk, and the memorized movement simply carries on into old age.

Some cats mark their territory with kneading, so accept it as a sign of affection and play along. You’ll likely hear some deep purring along with the pressing paws. It means your feline is feeling good! 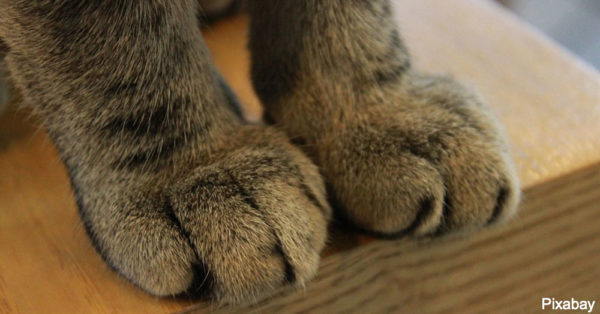 What’s more comforting than the smell of freshly baked bread? The sight of a freshly formed cat loaf, perhaps.

Just like cats enjoy lounging in the well-lit spots of your home to soak up the heat of the sun, curling their paws under into a loaf helps regulate body heat. According to Blind Cat Rescue, a cat’s internal temperature averages between 100 and 102.5 degrees Fahrenheit, so it’s likely your cat is just feeling a little drafty and is trying to conserve warmth.

Or maybe it’s just into bread. 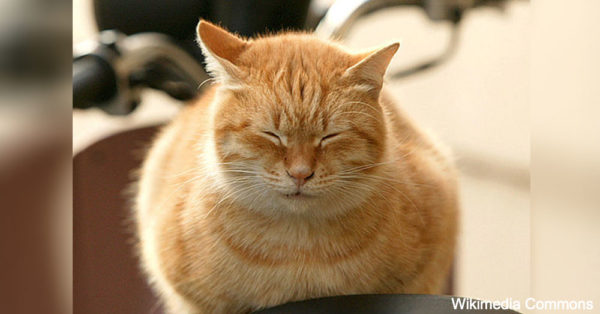 Most people recognize purring as a sign of affection and acknowledgment, and they’d be right. But cats also purr when they’re feeling scared, anxious, or in pain.

A cat purrs by vibrating the cords in its larynx while breathing in or out. The vibration is much greater than that of the human voice, and many feline experts believe the act of purring can sooth a stressed cat. Wired reported that purring may stimulate bones that could become weak and brittle, and one cat may even go so far as to lay next to another to purr if one of them is injured. 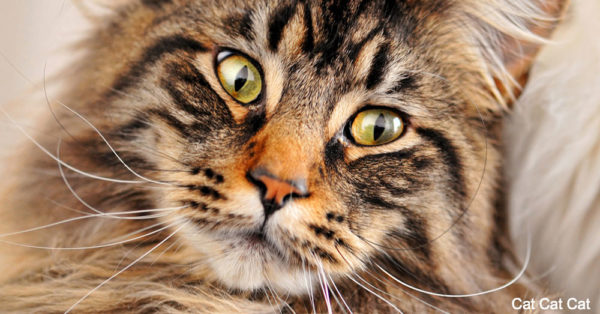 After a good meal, some cats will paw around the perimeter of their dish in an effort to bury their food. It’s an instinctual motion, related to burying the carcass of a kill in the wild, where it would otherwise attract larger threats. Swiping kibble around on a counter doesn’t exactly accomplish the same goal, but it’s the intent that matters to the cat.

You may notice cats do the same after finishing up in the litter box. A cat can tell quite a lot from the smell of another, and covering up its tracks helps disguise its whereabouts from predators. There may be far fewer predators in your home than in the great outdoors, but old habits die hard, and instincts even harder. 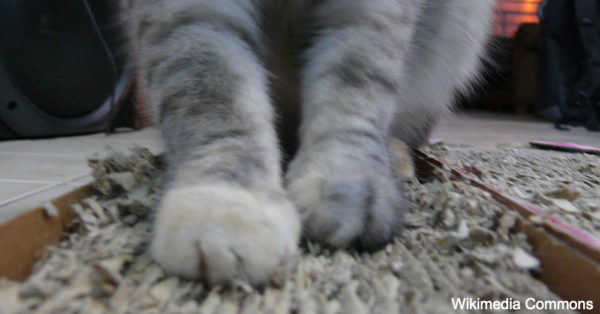 Some cats will sprawl out when they sleep, but most will curl up into a tight ball. It’s a natural way for mammals to keep warm and safe while they rest.

“They either push into small spaces to have some security with solid walls around part of their body so they can’t be snuck up on, or they roll into a tight ball,” Dr. Kat Miller, Ph.D., director of anti-cruelty and behavior research at the ASPCA and a certified applied animal behaviorist, told PetMD. “It’s also similar to the way a bird tucks its wings in or tucks one foot up into his feathers. It’s an easy way to retain heat.” 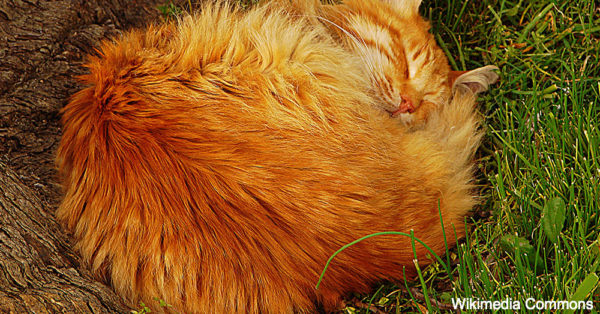 When a cat exposes its midline to you, it’s telling you that it feels comfortable with you in the room. You may reach out for a belly rub, and while many cats will even let you follow through, you’ll know the second a cat isn’t interested in such advances.

Apart from a sense of satisfaction, or perky playfulness, a cat may bare its belly when expressing trust, or even when attempting to defend itself from taller animals. In an unspayed female cat, an exposed belly may mean that she has mating on her mind. 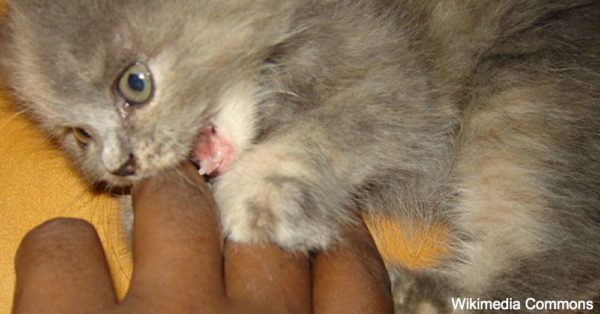 Cats are notorious for interrupting work spaces. There are likely few computer-owning cat owners who haven’t found their feline traipsing over their keyboard at least once. Why do they do this? Simple. Cats crave warmth, and a plugged-in computer, especially one running several Animal Rescue Site tabs in a browser, is nothing more than a glorified heating pad to a cat.

Purr-haps it’s simply for attention, or maybe it’s so they can maintain their higher internal temperatures. Or maybe you’ve just browsed enough today.

According to Dr. Miller, “it’s hard to ignore a cat when she’s sitting on the keyboard, and she’ll quickly learn that by sitting there, Mom is more likely to give her attention.” 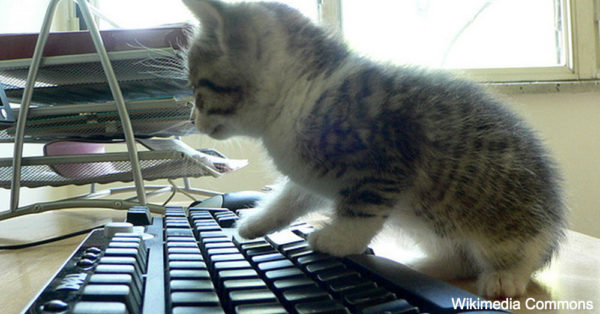 Late at night, when you’d rather be fast asleep, your cat may have wilder plans in mind, like running around or pouncing wildly. The “midnight crazies,” as some call it, perfectly describes this spike in cat activity during nocturnal hours.

It may be an instinctual behavior, exciting a feline with the thrill of the hunt when nocturnal prey can be found outdoors. It may also be a sign that your furry friend doesn’t get enough play during the day.

“Cats in the wild are active at times when rodents come out, typically after dark,” Sandy Myers, an animal behavior consultant with Narnia Pet Behavior Clinic in Naperville, Illinois, told Pet Place. “A cat naturally wants to spend her evenings hunting and playing predator games, even if she is a well-fed house pet.”

While midnight crazy cats typically find ways to entertain themselves, the incessant racket they stir up isn’t always as entertaining to humans. Spend a little more time with your pet, introduce some new toys, or play some calm music, and you may find your nights getting a little quieter. 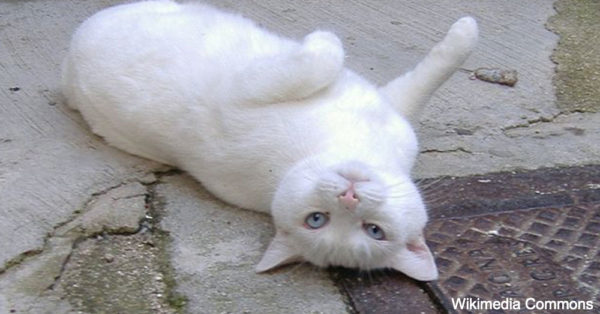 Cats could probably care less about plumbing, but few have met a sink or tub that wasn’t worth inspecting a little closer. Leave a trickle on, and they’ll jump right in to drink. Shut it of and they’ll jump in anyway. There are several theories as to why felines enjoy these bathroom fixtures so much, but it’s possible we will never know the truth.

Tubs are great hiding places and may have the same allure as a cardboard box to a cat. The damp environment may be preferable to other parts of the house. The bathroom fascination could also stem from a cat’s innate curiosity of running water. 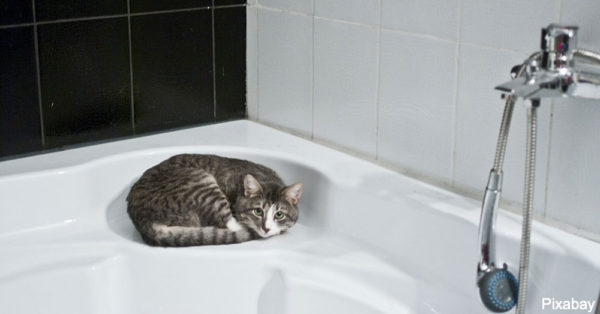 What strange behaviors does your cat have? Let us know if they didn’t make the list! In the meantime, click next below to read about a cat with a very important job — keeping his fellow shelter animals calm while they go through trying surgical procedures.

30,488,030 pieces of kibble have been donated so far in June.View our site totals and read our FAQ