Earlier this summer, Dion Leonard finished the month-long Four Deserts Gobi March in China with a personal best and a new little friend, a stray dog he named “Gobi.” We’re glad to say their story now concludes with a happy ending.

Since we first reported of the attempts to bring Gobi home from China, he had unexpectedly gone missing in Urumqi for days. Gobi’s owner, Dion Leonard, contacted the local animal shelters and asked their help in finding Gobi.

It was a tense few days, but Gobi was eventually found and will be returning to Leonard in Scotland!

The Four Deserts Gobi March is a week-long foot race across 155 miles of extreme terrain and searing temperatures. Participants are bound to pick up a little dust on the way, and in one instance, a little friend, too.

Australian runner Dion Leonard and competitor Brendan Funk noticed a small dog hanging around the participants’ campsite after the first stage of the race. Funk said the dog ran right past him in the first stage. Then, at about 20 miles into Stage 2, the dog caught up to Leonard and took interest in his ankles.

“Once we had begun the stage Gobi seemed to like the bright yellow colour of my gaiters and proceeded to run next to me,” Leonard said. “When she came into camp she followed me straight into my tent, laid down next to me and that was that – a bond had been developed.” 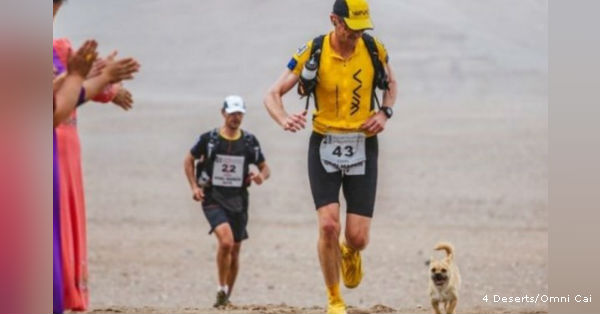 Funk said the dog looked like it enjoyed taking part in the Gobi March, and would run a stretch of the trail before circling back and waiting for the other participants to follow. After she crossed the first finish line, she made a home at the campsite and quickly became the race mascot. Named “Gobi,” the stray dog was treated to whatever snacks the runners were willing to share by day, and at night could be found snuggling in Leonard’s tent.

“I didn’t [adopt her], Gobi seemed to adopt me!” Leonard said. “The dog was more famous than anyone in the race. She was in everyone’s blogs and emails and was all over the race photos making her the star of the race.”

Gobi remained a steadfast companion and protector of Leonard throughout the event.

“She was the best dog you could imagine – no barking, no biting, no chewing on things, no rooting through bags or stealing socks,” said Richard Henson, Leonard and Gobi’s tent mate. “If one of us would get up in the middle of the night for a bathroom break, upon coming back into the tent, Gobi would let out a little growl until she confirmed who you were. If Dion got up, she would follow him and escort him there and back. It was a really special bond between Dion and Gobi.” 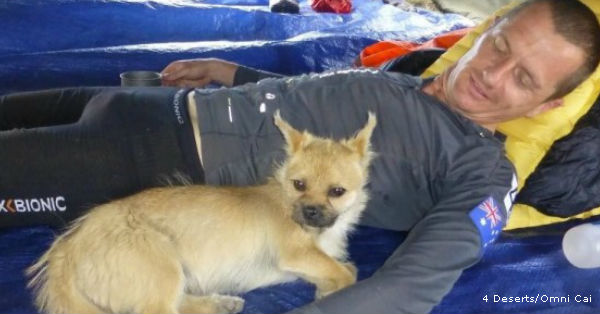 Wherever Gobi came from, one thing is for sure, she belongs with Leonard. Their special bond is more than just teammate camaraderie.

“On Stage 3 I had to carry Gobi across a wide river and then over a water sluice gate that she couldn’t have passed on her own,” Leonard said. “I went on to win this stage but at the time I was actually in third place and had a lot of work to do to catch up to the leaders. It’s fair to say that I didn’t really have the time to fetch and carry her, but I realised then I couldn’t leave her behind.”

Leonard is now trying to make room for this new friendship back home in Edingburgh, Scotland.

“As soon as I got back to the hotel after the race, I rang my wife and said to her ‘do you think our cat will mind if I bring Gobi home’?” he said. 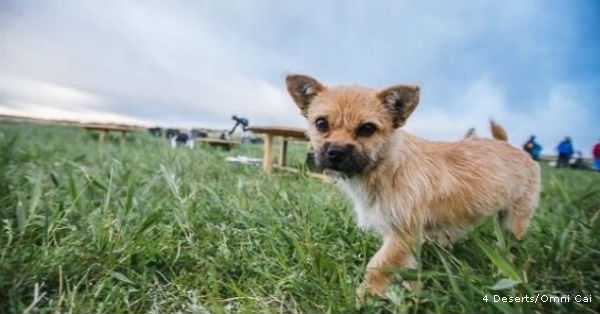 Bringing Gobi back is involving more than just an extra luggage fee, though. Leonard is looking at about $6,500 in costs, some of which has been defrayed by generous Gobi March 2016 competitors, and the rest hoped to come in through a crowdfunding campaign. While Leonard is clearing room for the dog in Scotland, Gobi waits patiently for his friend back in Urumqi with Gobi March management. The SPCA in Hong Kong is providing hope, too. Chairman Derek Kwik is also a 4 Deserts Club member, and one of many moved by the story of Leonard and Gobi.

It’s not unusual for dogs to run alongside 4 Deserts competitors, as they have in previous races, but none have shown the spirit or playfulness of Gobi.

“There was something about the little dog in the Gobi that captivated everyone,” said Mary Gadams, 4 Deserts founder. “At the end of Stage 3 she was limping and actually threw up at the finish line so we took charge and banned her from moving until she rested and was checked out by a doctor. Gobi really became the race’s mascot – she embodied the same fighting spirit as the competitors. She also rarely barked and wasn’t very demanding so we all had to take the time to try and feed her and force her to drink water.”

You can follow Leonard and his attempts to bring Gobi back to Scotland at @Oh_Yes_Please on Twitter.

“For a little dog Gobi certainly has a big heart and some pace to match,” said Leonard. “Gobi picked me to be her pal for life, so I am doing what I can with some great support from around the word to make this happen.”

We’re all eager to see Gobi make it home, but until then, follow this link to read about Ludivine, a bloodhound who ran an entire half-marathon in her hometown and had some amazing adventures along the way.

1,295,700 pieces of kibble have been donated so far in February.View our site totals and read our FAQ