If You See A Dog In A Hot Car, Are You Breaking The Law By Breaking A Window? Here’s Your Answer!

“Don’t. Just don’t,” the Pensacola Police Department posted to Facebook after breaking into a vehicle to rescue two dogs from a locked, unattended car. “If you leave your dog in a hot car and that dog is suffering, we will do whatever we have to do to free him. Or her. Doesn’t matter, we like both kinds of dogs.”

While good samaritan laws do not exist in many states, according to attorney and Director of Legal Affairs for the Animal Protection League of New Jersey, Doris Lin, the chances of being prosecuted for saving an animal from a hot car are minimal.

“For every person who would break a window to save a dog, there is someone who thinks her dog would have been just fine and wants you to mind your own business. You will have been morally right in saving the dog’s life, but others don’t always look at it that way,” she writes. “Sadly, not every car owner will be grateful, and some may decide to press charges or sue you for damages.” 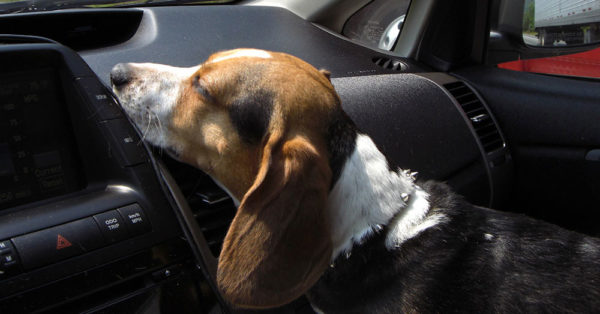 But the law isn’t without common sense or compassion in this situation.

“There’s absolutely no way in the world we’d prosecute someone for trying to save the animal,” Onondaga County District Attorney William Fitzpatrick told Syracuse.com. However, he added, whenever coming across an animal in a hot car, law enforcement should be notified before you take action.

According to the Humane Society, when it’s 80 degrees out, temperatures inside a vehicle can easily reach 99 degrees within 10 minutes — the same amount of time it can take to mail a package or pick up your dry cleaning. Cracking the windows just isn’t enough.

A hot dog isn’t always a happy dog, especially when that dog is locked in a car with no way out. Every year when the mercury rises, canine companions are at risk for heatstroke or death when their guardians make the mistake of leaving them in a parked car. Animals can sustain brain damage or even die in as little as fifteen minutes. Follow this link to learn more and make a pledge to keep canines cool!

Parked cars are fast-acting deathtraps for dogs: On a 78-degree day, the temperature inside a parked car can soar to between 100 and 120 degrees mere minutes, and on a 90-degree day, the interior temperature can reach as high as 160 degrees in less than 10 minutes.
Sign the personal pledge to raise awareness and act when pets are at risk.
Make a difference!
Back
Andrea Powell