Once Terrified Of Dogs, This Rescued Cat Is Loving And Living More And More Each Day

What does it take to make a beautiful friendship?

For Ollie, Ariel, and Amber, just a pair of hiking boots and a wide open horizon. The trio are as inseparable as can be these days.

But it wasn’t always that way.

Amber Pitcher was working at the Village Animal Clinic in Voorheesville, New York when someone brought Ollie in with serious injuries. His leg had been shattered, and no one knew where he came from or if he even had a home.

“I saw him in the kennel, and he was just purring, even though his leg was completely shattered and he wasn’t able to walk,” Pitcher told The Dodo. “He was just so sweet that I made a spur-of-the-moment decision that I was going to bring him home.” 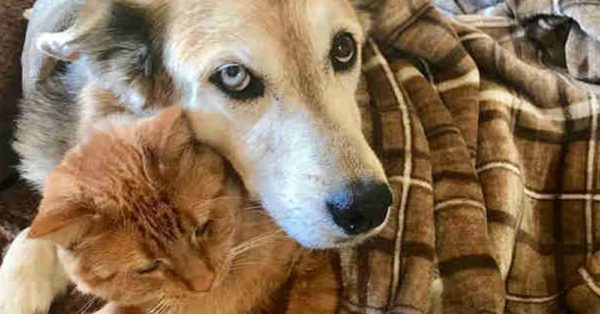 Along with his incapacitated leg, Ollie was also afraid of dogs. That put quite a hurdle between Pitcher and the perfect pet family, as her cuddly canine, Ariel, was waiting for her at home. 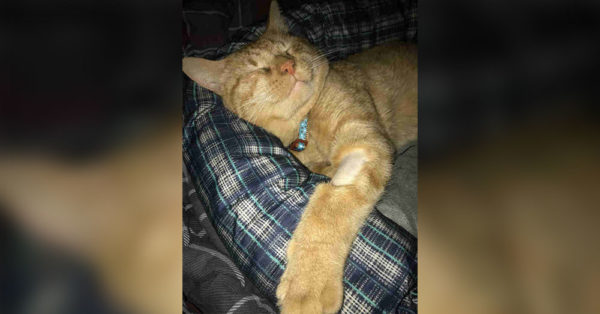 Pitcher had adopted Ariel from the Mohawk Hudson Humane Society 10 years prior to meeting Ollie, The Dodo reports.

“I went to the shelter with my parents, because I was still in high school at the time, to just take a peek at the dogs,” she said. “The first thing I noticed was her different-colored eyes. And she was sitting quietly in the back, so I leaned in and stuck my hand in there, and she crawled over and just stared at me. I knew right then.” 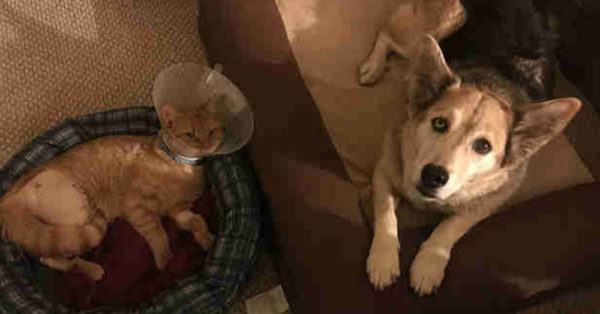 Pitcher and Ariel have spent their lives doing most everything together ever since. Fond of outdoor activities, they quickly became avid hikers, traveling throughout the different mountain ranges around their state. From the Catskills to the Adirondacks, Pitcher and Ariel took on every trail they could find.

“We finished the Catskills first,” Pitcher said. “Then we eventually finished all the Adirondacks. It’s a big accomplishment, especially for a dog. Some of the hikes are over 20 miles in a day.” 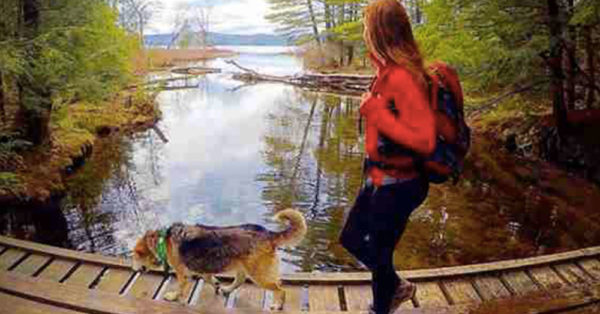 Would Ollie be able to join this active pair? There were many doubts that he would even remain calm near a dog, let alone live with one. One of Pitcher’s coworkers at the shelter said Ollie’s contempt for canines ran deep.

“He was so frightened by them he actually started urinating blood at the clinic,” she said. 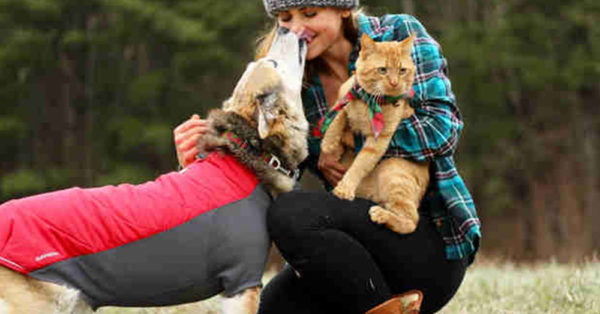 In reality, Ollie had cystitis, a treatable condition which caused his urinary tract to bleed. It wasn’t a comfortable situation to be in, and Pitcher was worried she’d only be making it worse.

“I was a little nervous,” she said. “I didn’t want him to be in a house where he was stressed out about that, but I figured I’d give him a chance. I thought, ‘I’ve never met anyone who doesn’t like Ariel—dog, cat or human.'” 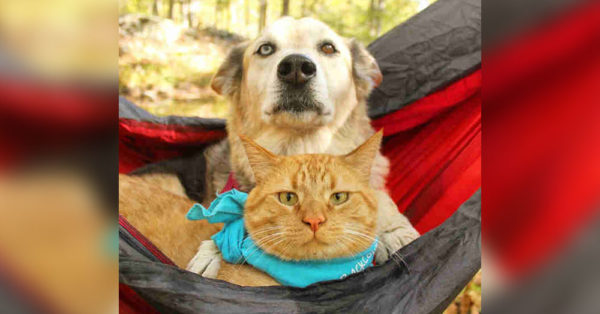 And then they met.

Click the button below to read on and learn how Ollie greeted Arial when he arrived home.