Pit Bull Rescued From Dog-Fighting Was Given Pizza Crust. His Reaction Is Absolutely Priceless!

This Pit bull, Finn, was one of nearly 500 dogs rescued in 2013 in the country’s second-largest dog-fighting bust. Fourteen people behind the operation were arrested. One of them, Donnie Anderson, is alleged to have electrocuted and hanged dogs who lost fights. He pleaded guilty in 2014 and was sentenced to eight years in federal prison. 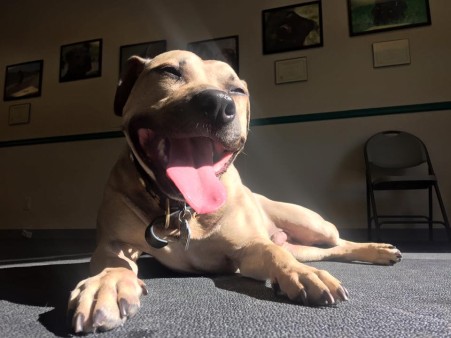 Now, Finn lives with his new mom, Andrea Kilkenny, a dog trainer in New Jersey. At first, Finn used to be afraid of some foods and treats and wouldn’t take them, but the video below proves that things have improved. When Kilkenny gives Finn a piece of pizza crust, he instantly gets the zoomies and runs all over the room. Kilkenny says Finn often dashes around and around when you give him something new because he wants to investigate it, but this time she says she thinks he was running around because he was so excited about the pizza crust.

2,493,200 pieces of kibble have been donated so far in February.View our site totals and read our FAQ