One Last #WalkWithWalnut Draws Friends From Around The World

Walnut was not the kind of dog to be easily forgotten.

After 18 years of friendship, Mark Woods and Walnut, his loving whippet, had loads of memories to look back on. Through two marriages, three engagements, and a move across England, Walnut and Woods had stayed by each other’s side. But Walnut’s advanced age and poor health had started to show, and those memories would soon be all that were left.

Woods could not offer his dog any more time on this earth, nor could he let his best friend pass over the rainbow bridge without one last adventure. One of Walnut’s favorite activities was walking on Porth Beach at Cornwall, England, which was something Woods could manage. He just wanted to call a few friends first.

“He has had an incredible life and having reached the grand age of 18 is ready for his final sleep,” Woods posted to Facebook.

Dog owners and allies around the world were alerted to Walnut’s last walk as #WalkWithWalnut spread across social media.

Supporters Tweeted their love to Walnut, while hundreds of others showed up to escort he and his human on their final walk together.

Word spread quickly, as millions of people shared the truly touching story. Even a single, “Walk with Walnut,” was released, seemingly overnight, by Ethical Record Label, based in London. Proceeds from the single are to be donated to the Battersea Dogs and Cats Home.

“They did it on the day of Walnut’s walk, it was so moving,” Woods told the Plymouth Herald. “I just burst into tears when I first heard it, it was so beautiful. I’m just going listen to it and listen to it, but at the moment I can’t get through it without crying.” 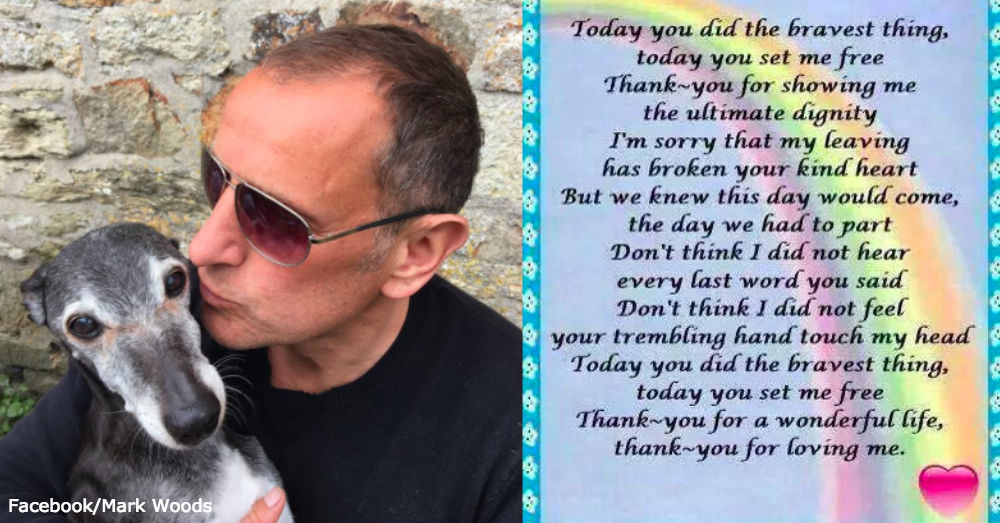 Walnut was euthanized just hours after his walk, at 11.56am, surrounded by his family, including three other whippets, Monty, Nelson and Charlie.

“He went very quickly and in my arms,” Woods posted to Facebook.

Connections from all over the world have been coming in, which helps him cherish Walnut’s memory. Each story divulges more of the emotional bond that held Woods and Walnut together for so many years.

“People came from all over the country came to the walk because they could release their own emotions and that’s what it was about really,” Woods told the Plymouth Herald. “It was lovely, kids were coming up and asking can I stroke the dog and it wasn’t overwhelming, everyone still gave us lots of space as they were doing their own walk with their own pets. We tried to speak to as many people as possible but we just wanted to get to the water’s edge and pop his little paws in to have a paddle and we managed that so that was great.”

Woods and Walnut were able to bring hundreds together for a day of celebration, and while far fewer may be in your plans this coming holiday season, it’s still best to be prepared. Guests bring with them gifts and food, but a surprising number of problems for pets, as well. Follow the button below to learn more about what foods can be deadly to cats and dogs.

1,364,150 pieces of kibble have been donated so far in February.View our site totals and read our FAQ